Contrary to what the media tries to make you believe, global climate change is not a major cause of species extinction. A recent study published in March 2019 in Frontiers in Ecology and the Environment shows that the major cause of extinction is the introduction of invasive alien species (IAS) into ecosystems. This phenomenon, well known to biologists and confirmed by the IUCN (International Union for the Conservation of Nature), is unfortunately little known to the general public.

Moving from one continent to another, humans have always brought with them a series of plants and animals outside their usual biogeographical limits. With the development of international trade this phenomenon is only growing. For example, within the European Union, the number of IAS would have increased by 76% between 1970 and 2007. Although the ecological impact of most introduced species is unknown or seems negligible, it is known that some species introductions have caused substantial changes in ecosystems [1]. These changes often include the disappearance of local species [2]. It was initially thought that these extinction phenomena were exaggerated and that local species could also be at the basis of extinctions [3], and some authors even think that efforts to control or eradicate introduced alien species would not be necessary [4]. However, no one has ever really tested whether introduced species caused more or less extinctions compared to local species or other causes of extinctions. This question was therefore studied by Tim Blackburn’s team (University College London, UK) in a recent publication of March 2019 [5]. For this purpose, they used the global extinctions database provided by IUCN.

2. Methods Used by the Blackburn Team

The researchers used the 2017 data from the IUCN Red List database (IUCN). This list lists species extinct since 1500. These are 782 species of animals and 153 species of plants (thus, 935 in total). For each extinct species, the IUCN list provides the probable cause of the extinction. In total, there are 12 phenomena that can cause extinctions (Threats Classification Scheme – version 3.2):

Sometimes, IAS was not the sole cause of disappearance. Most often, a second cause was associated and probably synergistic: for example, about 1/3 of the extinctions in which IAS intervened (29%) also involved the use of biological resources (cause # 5) as the second factor of disappearance. Similarly, about 1/5 of the extinctions in which IAS occurred (21.7%) included agriculture (cause # 2) as the 2nd extinction factor. Further details are given in the Blackburn publication. Figure 1. Number of recent animal extinctions (IUCN categories « extinct » [EX] and « extinct in the wild » [EW]) for different groups of animals (figures from IUCN Table 3a). The colors provide information on the causes of the extinctions (« Driver »); for example dark purple is used for IAS (« Alien »), extinctions caused by local species (« Native ») are light purple. The category « Neither » includes other causes of extinction or unknown causes (source, Blackburn et al., 2019).

None of the 935 extinctions is mainly due to climate change. This is also confirmed by other studies on biodiversity loss, such as that recently published by WWF.

• The major cause of species extinction is not global climate change nor CO2. Species disappear first because of the introduction of invasive alien species. So let us be wary of the alarmist statements conveyed by the media;

• The lack of link with the global temperature is not surprising: if we take the example of temperate zones, in one day the temperature can vary from 20 ° C between morning and evening (for example in the month August). All species are accustomed to these differences. So what about + 0.8 ° C in 138 years … or 2 ° C more predicted by computer models for the year 2100 … Do not you think that animal and plant species will resist?

• Humans, however, are responsible for the bulk of animal extinctions, not because of climate change or CO2 emissions, but simply because they change the range of some species (introduction of IAS) but also because it is fishing, hunting, polluting, cutting forests and building roads. This is also confirmed by a recent WWF study on biodiversity.

In conclusion, do not put (always) the climate at all sauces, here obviously it has nothing to do with the problem.

The World, decarbonization by 2050 or Not? -That’s the question! 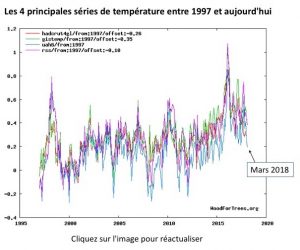